A Bit About My Locations​

Many of the locations in my books are fictionalised.
​
Garside, in 'Boundaries' for instance, is inspired by Bradford, but also has features of other Yorkshire towns. And Spatown, in A Tale of Two Sisters, is loosely based on Harrogate, again with some fictionalised elements.

But some of my locations are real.

So, on this page, from time to time, I'll be adding some interesting snippets about some of the real life locations in my books.
Click the pictures of First Out, Gateways and Abney Park for more information....

Full info on The Junction and The Woodpecker are under their photos.


While I was trying to get information about these places, I began to realise how little is available on record about them. So, if you have personal recollections or anecdotes about any of the lesbian and gay locations here, please do let me know and I'll try to include them.
After all, these places provided a safe haven for us when we weren't welcome elsewhere.
They're a big part of our social history. They deserve to be remembered. 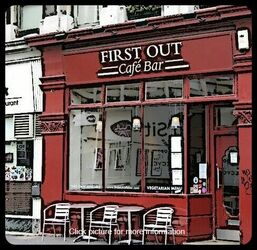 Th​
First Out was London's first openly gay cafe bar. It was located in St Giles High Street in the West End. 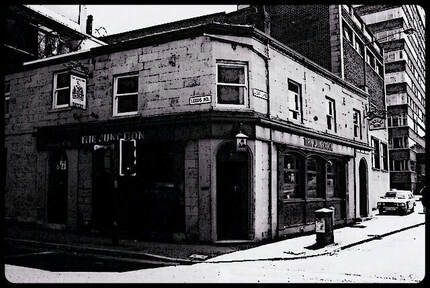 
​On the way home, Justine was quite animated.... 'Sylvia said there's a good pub in Bradford.... The Junction. Plenty of girls go there, she says. Gay girls. Not just fag hags. She thought you were cute, by the way. If she should happen to be your type at all.'

A Tale of Two Sisters


​
AND HERE, WITH MANY THANKS, ARE SOME MEMORIES OF THE JUNCTION FROM THE WOMEN OF BRADFORD...

Wow. Walking into the Junction that first time. It was like coming home. As a child I didn't know what a lesbian was. I knew I didn't seem to fit in. I was never really happy. Didn't know why but when I walked into that pub I knew that's where I belonged.
I can remember where we all sat. The group I hung round with always sat at the back next to the jukebox. Jenny, Shelly and Blue, Chrissy and Sheila, Maggie, Elaine and Sherlie. I remember Peter who always had something witty to say to any of the girls that came in. I remember Tallulah another Gay fellow that used to have us all laughing.
I loved having our Gay Times delivered and loved the cockle man on a Friday.
Dashing for the train to Charlie's and The New Penny in Leeds after last orders.
Good times. Never any trouble.
It was a sad day when they shut The Junction.
We then had The Dallas Bar, Fagins, and another pub Maureen and Lynn ran on Manor Row. She would have live acts on a Sunday. One act was Jason with all his snakes. He used to be carried on to the stage in a coffin.
Nice to look back.

Like many I was always excited when Friday and Saturday evening arrived after a hard week's work. I loved going to The Junction. It always seemed to be packed with happiness and laughter. We never went late as it soon became really packed and people would spill out of the doors and into the road clutching their pints. There were two main rooms once you went through the main door and even though it was a mixed gender pub in the main the women used the room on the left and the men the room on the right. I loved the mix of people that you found there, from teenagers up to seniors, the unemployed to professional people. My big love of The Junction though was its juke box. It stood proudly at the top of the room where the women were. Nothing tame in The Junction. It belted out the hits of the day and was therefore updated very regularly. I use to stand and lean on the juke box and watch the sea of faces having a good time. There were so many good hits in the 70s and 80s that everybody seemed to like and we'd all sing and sway together. 1980 saw Marty Web's 'Take that look off you face'. We would all camp it up to that, pointing our fingers towards someone as we sang it. The young men behind the bar were always very friendly. (I can't remember there ever being any women) The young men behind the bar were as camp as a row of tents. They definitely knew how to camp it up in their tiny, tight, silk, short shorts. I do remember a sad time in The Junction. I asked where one of the young men behind the bar was. I discovered that having been diagnosed with HIV he had taken his own life. This was going to be a harrowing time for a lot of people. The Junction always ran an annual long weekend away for May day bank holiday. Everyone would pile into the coach for the long awaited trip to Blackpool. You could live off the stories that came back for a long time afterwards. That particular weekend would finish some relationships and also start many more. Anyway, back to the good old Junction. When it was closing time we'd leave in our droves and go on to the nightclubs. It was a very sad day when they pulled it down to make way for a new road and a new building. 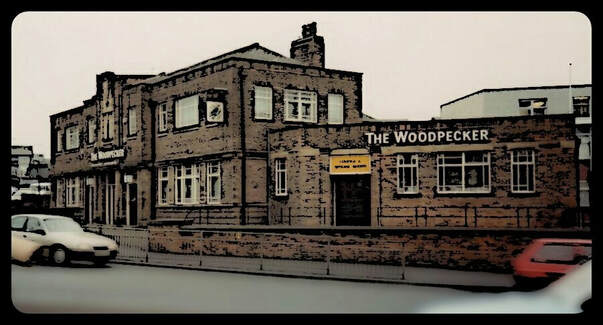 'After that, I abandoned The Queen's and started going over to a place in Leeds. The toilets were a disgrace and the smell of cannabis was overwhelming, but the music was good. I got to know a couple of people to talk to, but mainly, I kept myself to myself, listened to the music, danced with women who caught my eye, avoided any sexual entanglement... and caught the last bus home. Later, someone who'd known me in those days, told me they'd thought I was 'mysterious'. Which just goes to show how you can create an image without even trying.'

This mystery location was based on The Woodpecker Pub in Leeds, affectionately known as 'The Woodie'.
In the late 70's I phoned Leeds Lesbian Line and they introduced me to the women's discos held in the back function room there.
Patti Smith's 'Gloria', 'We are Family' by Sister Sledge, and, for some reason, Dusty Springfield's 'Son of a Preacher Man' were dancefloor fillers.
And despite the questionable hygiene (and lack of light bulbs) in the loos, it was a great place to be.

Here, with many thanks, are some memories from Helen, who, must have been there around the same time as me...

'I have happy memories from 1979-80 – it was every Wednesday.  It was friendly and fun, but the downside was the smokiness – somehow back then no-one even suggested it should be non-smoking.  It was lesbian and feminist.  A favourite record was We are Family,  played at least once each week I think.

We used a back room in the Woodpecker pub.  It was on the corner of a busy road junction, and was later demolished to enlarge the junction, but I think the disco ended before that.  Later there was a disco at the Dock Green pub, but it wasn’t the same.'

And moving on to some general locations.... 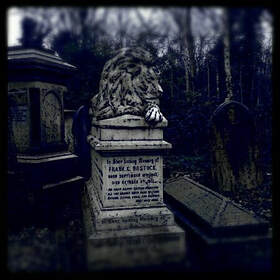 ​'She wasn't sure it had been a good idea coming here. The cemetery was a gloomy place to be in her current frame of mind. It was half deserted, apart from the dog walkers and an occasional cruiser, glimpsed from the corner of her eye as she wandered its avenues and slippery paths in half-light and spitting rain. The boarded gothic chapel was eerie as she passed it. It had been torn and ripped by fire. The ten-point rose of the window was blackened. She remembered the video for 'Back to Black'. Amy Winehouse leading a funeral cortege along this same bleak driveway. And there were angels... angels everywhere. They made her long for Saskia.'

​Abney Park cemetery is the first of my locations without a specific lesbian/gay theme.
Located in Stoke Newington, in historic parkland, the cemetery opened as a non-denominational burial ground in 1840.
There's more information if you click on the photo.